It is known as “Casas de Tafada” (Houses of Tafada) a remote island area formed by two stone houses in ruinous state, in the northeastern corner of the island of Tenerife.

Tafada is accessed through a small path that starts from the town of Chamorga, a few meters from the only bar of this town called "Casa Alvaro".

The walk between Chamorga and Tafada is hardly done in thirty minutes at a slow pace, enjoying the nooks and crannies of the landscape. It is a narrow path that is partially muddled after the rains but which, step by step, introduces us to a virgin and pristine terrain of great telluric strength and botanical wealth. 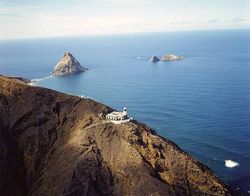 Arriving at Tafada we continue the path to the right, which will take us to a sort of stone plateau where a small solitary dragon tree stands. From this point, in the days of maximum clarity, a magnificent landscape is contemplated.

The immense view unites to the northeast the indomitable Roques de Anaga (Anaga Rocks) with the eastern lighthouse of Anaga, the oldest of the Island, in service since the reign of Isabel II, concretely since 1864; and to the west the island of Gran Canaria. It is very probable that there is no point on the island of Tenerife in which the sister island is enjoyed more intensely. It is so close.

The elevated position of Tafada, makes of it a magnificent watchtower on the immense blue ocean. Its virginity makes it a place from which it is still easy to spot wild partridges and other wonders of Tenerife´s flora and fauna. Its remoteness makes it an ideal place to enjoy silence and meditation. As well, its extreme eastern location, makes it an exceptional site to enjoy a splendid sunrise.

Undoubtedly, Tafada is another of the magical corners that can be enjoyed in this jewel of the Atlantic called Tenerife.