The Erjos ponds in the highlands of northwest of the island, part of the municipalities of Los Silos and El Tanque, are the most important wetlands on the island of Tenerife. A unique landscape, whose heyday comes after winter rains and that were formed in a waterproof ground arisen as a result of withdrawals of fertile soil for the "sorribado" of coastal areas to form export based plantation areas.

These extractions, occurred between the 50s and 60s of last century, generated the basins where today the ponds sit. Successive rains and run offs, filled with water the area, more or less in regular basis, forming the current wetland.

The wetland is dominated most fundamentally by reeds, ferns, tagasastes and brambles and it is a favorite place of settlement of the coot (fulica atra), snipe (gallinago gallinago), large and small sandpipers, clear redshank (Tringa nebularia) and occasional ducks. 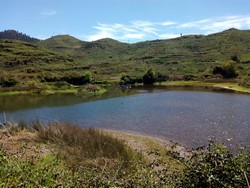 One of the major attractions of the ponds is its location at the foot of Pico Viejo, one of the most beautiful and less viewed faces of the majestic Mount Teide. The ponds which are virtually along a 15 minutes pleasant walk from the church of the small town of Erjos, which is the place that we chose to park our car.

Very close, as well to the famous Monte del Agua rainforest, these wetlands are predominantly surrounded by a deep rural landscape, a loner and bucolic place, only enlivened by the voices of the Sunday hikers who frequent the area after a rainy period.

They are mainly the children who most enjoy the area, looking at the birds swimming on gaps or soaring on mass after some noise or incident, in what is an unusual picture in this always surprising island of Tenerife.