Located in the popular square of Los Patos in the late nineteenth century expansion area of Santa Cruz de Tenerife, this spectacular Tenerife mansion was designed in 1912 by the influential architect, Mariano de Estanga. It was commissioned by a former engineer who was responsible for electricity production plant in the city, Mr. Nicholas Martí Dehesa. 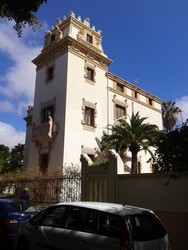 Considered by many Estanga´s masterpiece, it responds to a secessionist Viennese Modernism and very specifically to the influence that the Austro-Hungarian architect Olbrich caused on the first owner of the mansion. 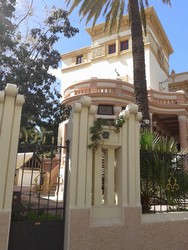 This Tenerife mansion, framed within the charming neighborhood of the "Barrio de los Hoteles" quarter in the capital of Tenerife, derives its stunning beauty from the successful combination of lavishly decorated elements with entirely bare areas, as well as the imposing tower, topped by Oriental inspired architectural details and the predominance of straight lines on the curve, except in the bay window area.

The outer fence, the parking area and the beautiful bird cage in the ample porch garden anteroom are all especially outstanding, as is the markedly beautiful and inspiring main staircase in the interior. 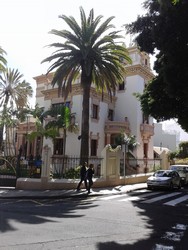 This building was for a while the seat of the presidency of the autonomous government of the Canary Islands, but today is the headquarters of a major dental clinic.