Sitio Litre Garden is considered the oldest garden in Tenerife.

It was Archibald Little, who after inheriting the property from his uncle in 1778, decided to transform it into a palatial recreational home, a true Tenerife mansion, by  making the garden richer and much larger.

Currently, the garden is open daily to the public, from 9:30 am to 5:00pm. In 2015 the entry price was 4.75 euros. One of the main attractions is a three hundred years old dragon tree, the oldest in Puerto de la Cruz. 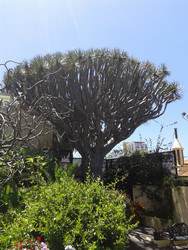 To the dragon tree magic, one should add the charm of walking through a classical garden compartmentalized into different sections and full of romantic corners, all accessible through paths of old Canarian stone slabs known as “losa chasnera”. 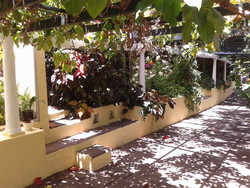 I particularly liked most the section of the garden which included the charming lily pond enhanced by a great collection of goldfish, of varying sizes including some very large specimens. However, the orchid house is the area which is considered to be more attractive to most visitors, for in it you can see probably the largest collection of orchids on the island.

The garden has many memories of the illustrious visitors who have either been treated to parties or have been staying at the distinguished mansion to which the garden belongs.

Maybe Agatha Christie and Alexander von Humboldt are the most renowned but the list is extensive and gives good account of the most relevant personalities visiting the island throughout the nearly three hundred years of history of this magnificent haven of peace in the heart of Puerto de la Cruz in the north of the island of Tenerife. 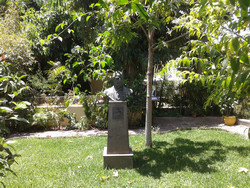 Finally, it would not be fair to end the commentary on this magnificent garden, without mentioning the marked English character permeating the area with many elements from the past like the Croquet lawn to the Tea & Coffee area just above the mansion terrace, which takes us back in time to the first wine merchants on the island and the adventurous travelers that preceded today's tourists.