The Palace of Salazar

The Palace of the Counts of the Salazar Valley, now known as the Bishop´s Palace for being the headquarters of the Diocese Nivariense since 1892, is perhaps, within the large urban houses of the island, the historic mansion of Tenerife par excellence.

Built in 1664 by Mr. Cristóbal Salazar de Frías, Count of the Salazar Valley, this egregious palace, stands out greatly for its façade of blue stonework masonry and it´s solid Spanish forge grills. The volcanic basalt stone used for this splendid façade came from the stone mines of Pedro Álvarez in Tegueste, and the whole was designed by master carpenter, Mr. Juan González de Castro Illada, and executed by mason masters, Mr. Juan Lizcano and Mr. Andrés Rodríguez Bello.

This remarkable baroque façade is arranged in three heights, where the upper height is occupied by two lateral turrets and by the central frontispiece bearing the family coat of arms in marble. The entire upper crown of the façade has an extensive proliferation of pinnacles and baroque gargoyles.

The second height contains four large windows, all of which are flanked by carved columns topped in Corinthian capitals and topped again by triangular frontispieces, two on each side of the central doorway, which is crowned in a broken circular frontispiece and flanked again by double columns. The ground floor has as well four large windows on each side of the main entrance door. All windows protected by solid forging grilles. 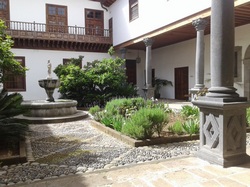 In addition to its splendid, unique and richly decorated baroque façade, this magnificent and emblematic Tenerife mansion stands out for its famous porticoed courtyard and it´s not less famous iron access gate.

The historic patio, very much acclaimed by almost every illustrious visitor to the island, has remarkable basalt stone columns standing over basalt plinths, which had been carved by Juan de Cabrexas in 1658, before the construction of this mansion, for the price of 100 silver reales. The courtyard has, as well, a small fountain in the very middle, surrounded by lemon trees. 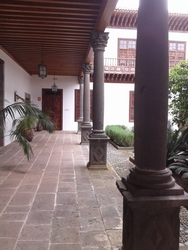 The palace, located on the very monumental street of San Agustín, known in the past as the Royal Street, seat of splendid houses in the heart of the town of San Cristóbal de La Laguna, a World Heritage Site by UNESCO, has been for many years not only seat of the Bishop and of an aristocratic family, but also, was for many years the home of the former social club, Casino "El Porvenir", where Teobaldo Power composed his acclaimed "Cantos Canarios".

His piano, and many other irreplaceable objects and documents, were made pasture of the flames in the dreadful fire that ravaged the mansion in 2006. Today, the negligence of some in the custody of such a magnificent legacy has been remedied by the double action of popular subscription and public funds, so that in 2009 a happy restoration of such a fabulous and historic mansion was completed. 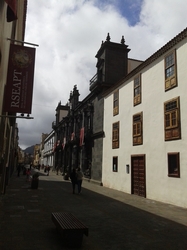