La Hacienda or Finca La Zamora is perhaps the last of the large family mansions built in the heart of the Orotava Valley, within the municipality of Los Realejos, following the pattern of the large country side Canary Manor Houses.

As a head of a large plantation, surrounded by the infinite greenery of hundreds of hectares of banana trees, stands this magnificent and historic mansion of Tenerife built in 1947 by the Salazar Family, whose characteristic coat of arms of thirteen golden stars on the field of gules, in this case carved in basalt, presides the main entrance. 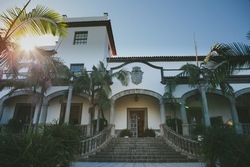 It was Mr. Tomás Machado y Méndez de Lugo, one of the highest representatives of the Neo-Canary style, Traditional Canary architecture revival, the architect in charge of designing such a remarkable building.

Like all great Canary manor houses, this property has its own chapel, but also large gardens, a tower, a large monumental stone stairway, and a portico with a porch of arches on Tuscan columns. What has turned it over time in one of the most popular places in the Orotava Valley for the celebration of weddings and other events.

A good work of basalt stonework and an excellent work of carpentry in tea wood, together with the traditional Arab gables and the characteristic Canary wooden balcony, are key elements of this unique architectural language that was developed in the Canary Islands between the 30s and 50s of the last century and of which were maximum exponents, both Mr. Tomás Machado and Mr. José Enrique Marrero Regalado. 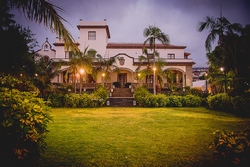 A simple observation of a good part of the buildings of Santa Cruz de Tenerife built mainly during the years immediately after the Spanish Civil War and throughout the period of autarky, that is, until 1952, unveils this singular regionalist aesthetic, with remarkable constructions such as the Market of Our Lady of Africa (1944), The Víctor Cinema (1954), the headquarters of what was the shipping company Rodríguez López in the street of La Marina or outside the capital, the Basilica of Our Lady of the Candelaria (1959).